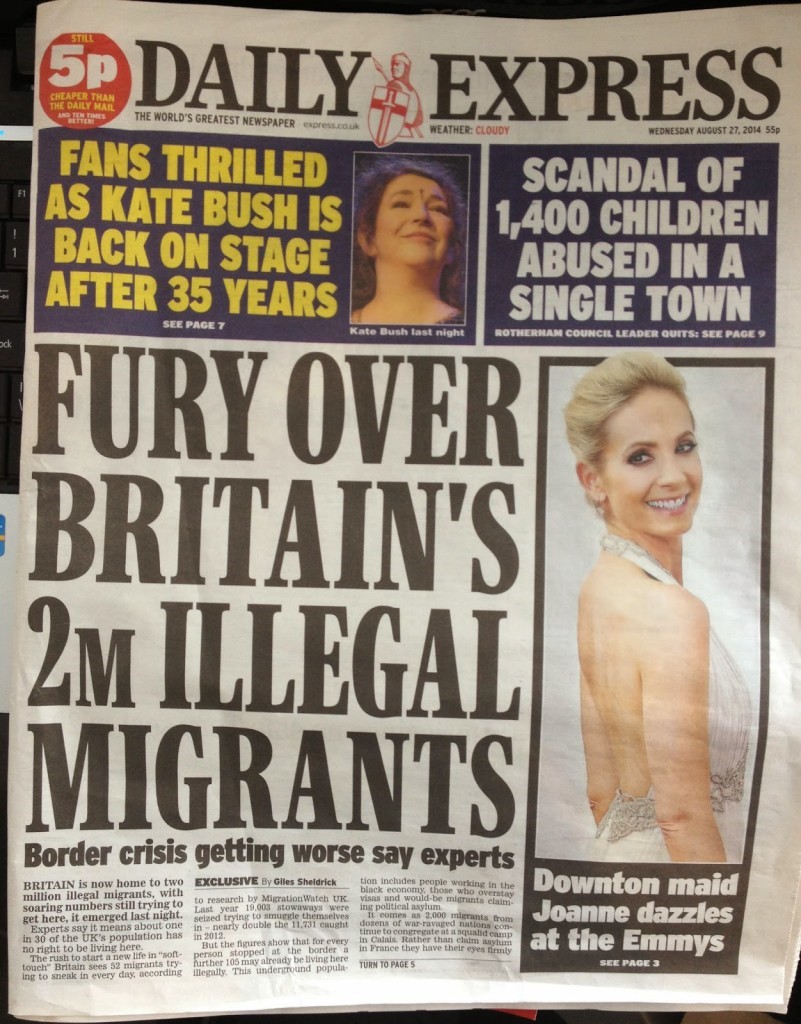 Ice and Fire perform the Asylum Monologues in Salisbury

Asylum seekers, immigrants and refugees get a poor press in the United Kingdom especially at the tabloid end of the market.  They are

described in biblical terms as ‘flooding’ into the country, of consuming a large part of the benefits budget, taking jobs and houses from British people and driving down wages.  Immigrants and asylum seekers are labelled ‘illegal’ and a picture is constantly painted of crisis levels of immigration doing harm to the country.  A Daily Express front page is illustrated but many such pages and headlines could be here instead.  It cannot be denied that there are problems arising from immigration but the lack of balance in the reporting is to be regretted.

The benefits brought to the nation rarely get a mention.  Indeed, it was revealed by Sir Vince Cable recently that Theresa May, as Home Secretary, suppressed nine reports showing such benefits.  On balance the economy of the country is in credit as far as the effect of immigrants are concerned.

Asylum seekers (who are never illegal asylum seekers) are part of those seeking to settle here.  On Monday 18 September 2017, Ice and Fire performed Asylum Monologues at Sarum College in the Close.  Ice and Fire are a group of actors who tour the country and read testimonies from people who have experienced traumatic events in their home countries who have made it to this country and are seeking asylum.  The testimonies change over time as new events unfold.

The first testimony was of a woman who left Uganda.  She had campaigned for women’s rights.  To do so risked being called a ‘rebel’.  Then 20 soldiers arrived in the village one day and took her to an army prison.  There she was severely mistreated, tortured and raped in front of her husband.  After 4 months she – along with four others – managed to escape three of whom were shot.  Recaptured, she was taken to a ‘safe’ house which was quite the opposite for its inmates.  Finally, she managed to escape to England possibly with the aid of her husband (she did not know).  She never saw him again.

She was in such a dreadful physical state on arrival she was taken to hospital and put on a drip.  She was pregnant but it was too late to have a termination.  Then began the process of seeking leave to remain with the Home Office.  This was an extremely lengthy process, and akin to a kind of ‘mental torture’ she said because it went on so long and you never knew how it would end.  At one point she was at risk of being deported back to Uganda and being tortured again.  After a long process of appeals she eventually won her indefinite leave to appeal.  Using DNA analysis she was reunited with her daughter she had not seen for eight years.

The second testimony was of a successful businessman from Syria who had seen his businesses looted and finally left the country and via Turkey and Greece made it to the UK.

But arguably the most chilling testimony was of someone called Louise who used to work for the UK Border Agency in Cardiff.  It was hard to believe that the things she described took place in this country and not somewhere in some despotic state.  On her first day her line manager said about children seeking asylum ‘if it was up to me I would take them out and shoot them.’  Conceivably, this could be an example of black humour albeit in poor taste, but it was said in all seriousness.

She was given combat training because some of the claimants are potentially dangerous.  She asked the trainer how many cases in three years have you granted asylum to and the reply was 3.  Just three.

The prevailing ethos of the Agency was not to let anyone in if at all possible.  The most chilling aspect to her story was the ‘Grant Monkey’.  This was not some kind of reward for good work but was placed on someone’s desk if they allowed a claim to succeed.  It was designed as a ‘mark of shame’.  Perhaps the one achievement resulting from her whistle-blowing was that this loathsome practice no longer exists.  One of the problems she said was people were recruited from university with no other experience of life and were put on the front line.  She said there was need for a Macpherson style Report into the Agency.  This was the 1999 report following the murder of Stephen Lawrence which shone light on race relations in the UK and coined the phrase ‘institutional racism’.

Juxtaposing testimonies of people who have experienced terrible and traumatic events in their lives including rape and torture and who may have lost all their worldly goods in the process of escaping, with the attitude of our Border Agency was decidedly shaming.  There is no denying that some people claiming asylum are far from deserving cases and may even people who have perpetrated terrible actions on others.  So there is need for rigorous scrutiny of claims.  This is different from treating all such people in the way they do.  Basic rights are not allowed during interviews of immigrants who may be vulnerable and traumatized.

This was an excellent performance and we hope to invite the group back again in the future.

If you live in the Salisbury area and you would like to join us you would be very welcome.  It is free to join.  The best thing is to come along to an event such as this and make yourself known.  Keep an eye on this site or on Twitter or Facebook if you prefer (salisburyai)