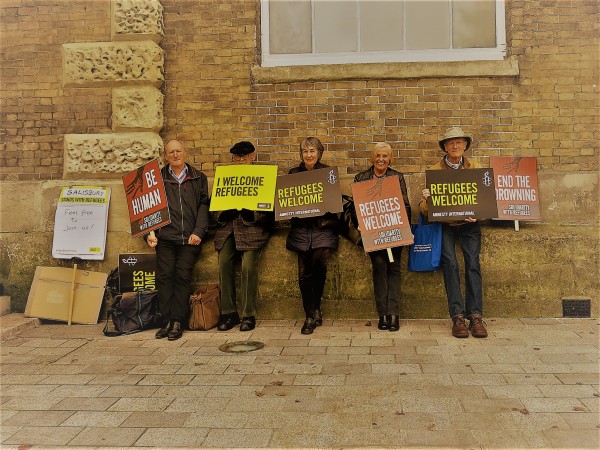 Members of the Salisbury group held a vigil in front of the Guildhall in Salisbury in support of refugees and asylum seekers.  We were delighted with the response which was not huge but even so, several came forward and thanked us for our efforts which was gratifying.  A number signed our petition.  Refugees and asylum seekers get a poor reception in this country and the negative nature of coverage by the tabloid press cannot help.  We reported in a previous blog, Sir Vince Cable’s observation that Theresa May, when she was Home Secretary, suppressed a number of reports which showed the benefits of immigration.  She is also famous for the statement to a Conservative party conference about a man unable to be deported ‘because he had a cat’: “I’m not making this up” she famously said.  Only she was.

For another picture of this event go to this link on the Salisbury Camera Club site.

If you live in the Salisbury area and are interested in joining us we would be pleased to see you.  The best thing is to keep an eye on this Website or on Twitter or Facebook (salisburyai) for our events and come along and introduce yourself.  It is free to join the local group.