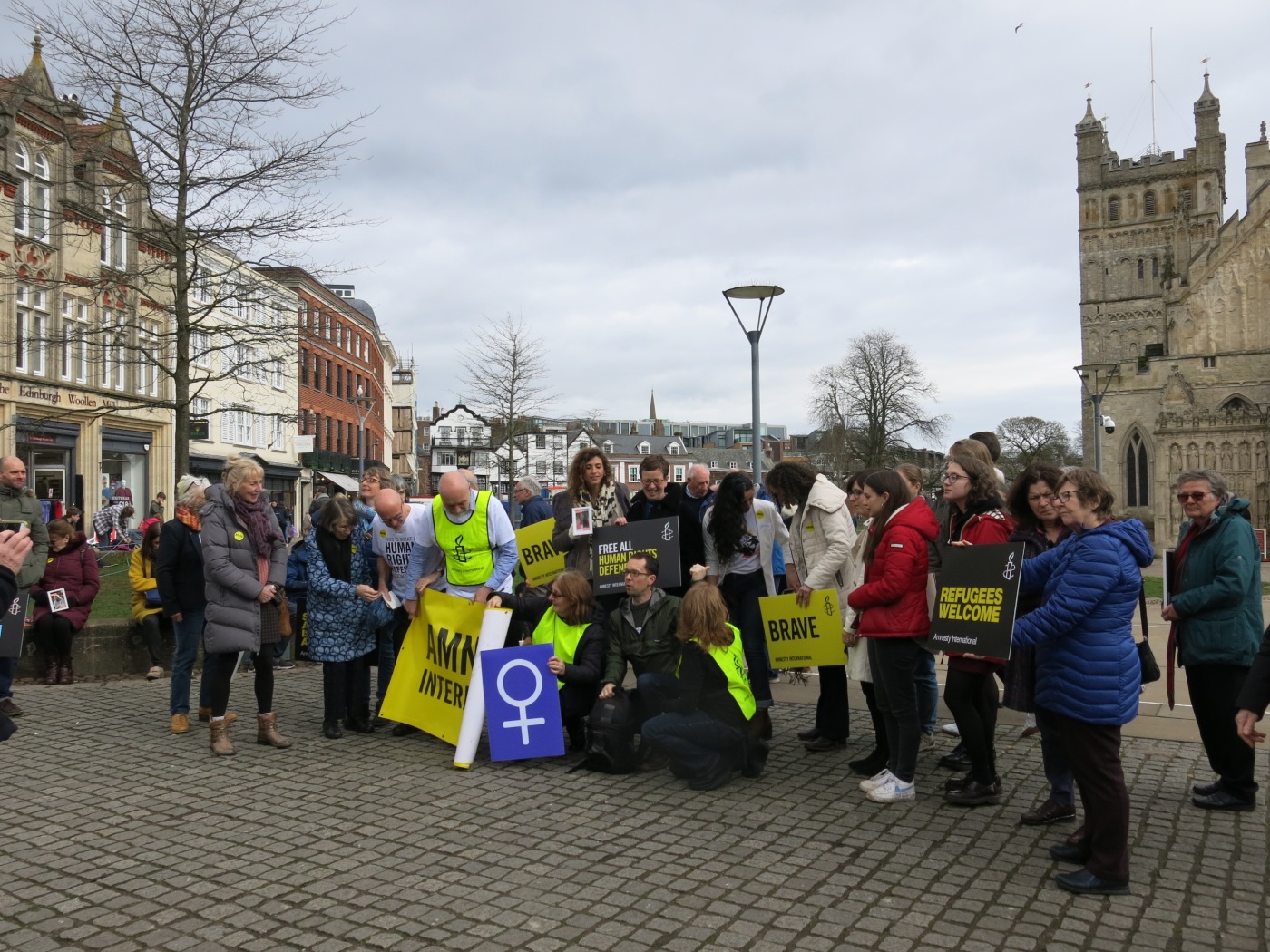 Four members of the Salisbury group attended the regional conference in Exeter yesterday, a truly

uplifting event.  We had four excellent speakers and we had a photo opportunity in front of the cathedral.

With all the talk from the current government, echoed in large parts of the press, of getting rid of the Human Rights Act and their desire to pull away from the ECHR, it was good to be among people who believe in the importance of these rights.  They are not there to help terrorists go free and to help hardened criminals escape justice which is the common refrain now, but to protect all of us in our everyday lives.  This is especially so as we do not have a constitution.

But one of the high spots was a young woman, Geraldine Chacón (below right) from Venezuela who is a human rights defender who was arrested by around 10 armed men and spent 4 months in prison before being released.  She has not been tried however so can be arrested again if and when she goes back.  The rights we take for granted were denied her.  No warrant for her arrest; no access to a lawyer; constant interrogations; never brought before a judge; no access to her family, particularly her mother who came every day but was not allowed to see her; and no charges brought. She was labelled a terrorist and her release was used to present the government in a positive light ‘look, we’re releasing terrorists’.  Calling anyone a ‘terrorist’ is the standard claim by nearly all authoritarian regimes for people who campaign for democracy, the rule of law and respect for human rights.

She became an Amnesty ‘prisoner of conscience’ POC case and thousands of letters were written.  She said they made a difference.  She was feeling vulnerable and abandoned she said and the letters made her realise ‘you are not alone’.  The letters ‘made me brave because I knew I had you with me’.  She only knew there were letters as news of them had to be smuggled in: she was allowed no correspondence directly.  It was a very uplifting talk.  In all this denigration of human rights by sections of our media and some of our politicians, it was good to know the basic business of Amnesty’s work, did and does make a difference.

One of the other speakers was Laíze Benevides Pinheiro from Brazil (left).  She spoke of her work in Brazil and the threat and risk from the most dangerous police in the world.  In 2019, they killed 1810 young men most of whom were black.  The murder of Mariella Franco has polarised opinion but she said a network had been created to help people who were the victims of violence.

There was another talk on climate and its link to human rights which may be the subject of a future post.  Kate Allen (Director of Amnesty) also spoke about the future direction of Amnesty and the worries about the attitudes towards human rights by some in the current government.  This is a worry expressed on this site in previous posts.

A really worthwhile day and congratulations to the Exeter Amnesty group for organising it so well.

There will be an Evensong this Thursday 12 March starting at 5:30 in the Cathedral.